After 13.5 years at the same company and some 15 years in the same industry, I have officially worked my last day for the man.  I am being forced to leave a few weeks earlier than I planned.  Thanks HR department for bringing it to my managers attention that I was deferring all of my income into my retirement plan.  Even if I worked until later in the year, the result would have been the same, defer all my income into my retirement plan.   Stay out of peoples personal business. I don’t need the income from the job, because of years of planning for this moment.  So, it’s bitter sweet.  I’m bitter at some ass clown who’s entire department should be outsourced (I wish upon them an eternity of working the same job).  At the same time, I’m happy to no longer be apart of an industry that I’ve grown to despise-the financial services industry.  Nothing but liars, crooks, and back stabbing.  It really is just a giant circle jerk of a circus portrayed in the movies minus the midgets.

I graduated college at the age of 20 in 3 years, ready to take on the world and work my way up the ranks in corporate.  I was super motivated at that time.  Probably the ultimate motivator in my life happened around 2005 at the company I’m leaving.  I realized that moving up meant kissing ass, being a yes man to a less qualified manager, maneuvering through the office politics BS with surgical precision that a brain surgeon would be jealous.  That wasn’t for me.  I’m too independent thinking to just be a cog in the machine.

I decided I needed out.  I could switch companies and go somewhere else, maybe make a little more money, but most likely a few months in, I would adjust and be in the same situation.  So instead, I would recall a discussion on “Game Theory” from a derivatives class in grad school.  Basically it was me vs the company.  I needed to try to reduce/eliminate as many variables out of my control to place myself in a position of Win/Lose or Win/Win.  Ultimately, the answer would be to build as much “Fuck You” money to not need to depend on a paycheck.  That would be my ticket to freedom. 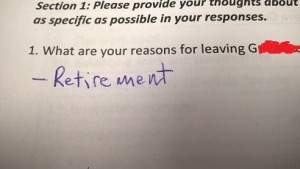 Finally that day has come.  (Yes, the above image is part of the “Exit Interview”)  After years of planning and hustling, I am FI.  No longer bound by the constraints of needing to depend on some corporation to provide cash in exchange for my time.  This journey has not been about building wealth, accumulating things, or trying to be the richest person in a room.  If you think that, you don’t get it.  It’s been simply about getting my time back.  My freedom.  If I don’t agree with something or don’t flat out want to do something, I can say “fuck it. I’m out.”  Honestly, I probably would have been alright 2 years ago, but the “just a little bit more” syndrome kept that from happening.  I leave behind the safety of having a stable paycheck, during a time the Russell 2000 has hit correction territory, have lost net worth equivalent to a fancy luxury car, in exchange for my freedom and a degree of calculated risk, yet lots of unknowns.  Is it worth it?  I can’t tell you the last time I’ve been happier than these last couple months.

I’d be ridiculous to think that I can’t be replaced.  Thinking that would be like sitting at a poker table and not seeing an idiot sitting at the table (hint: it’s probably you, so get up and leave the table).  We are all just cogs in a machine.  Eventually you get tired of spinning around.  Find what makes you happiest and do what you need to get there to break free.

This last week has been pretty weird building up to my early exit.  It’s basically a reminder that the Corporation exist to make a profit, regardless of the well being of the living, breathing organisms the very corporation is dependent upon to properly function.  Don’t leave yourself in a position where an early exit leaves you in the 2 remaining quadrants of “Game Theory”: lose/win or lose/lose.  After spending over 1/3 of my life at the same employer with no thank you upon exiting, I can honestly say I will not ever work for someone else again.  If they are serious about addressing issues, they can contact me as a consultant.  Yes this happened (I can be a dick when I want to sometimes).

I’m glad I got to say good bye to co-workers at least.  I’m told the strange fluid coming from my eyeballs were tears.  Some of you may stumble upon this site.  My co-workers are what kept me able to do the same shit for so long.  One of the best parts of saying good bye, was just the number of people in the building opening up more and sharing their dissatisfaction with the company and wishing they could leave, but can’t because they needed that check.  I had people I barely knew their name start telling me these things and they wish they could get in my position.  Well anyone can do it.  You just need to build a good foundation and give it time.

With that said, I’m locking up the cubicle door one last time and throwing the key away (no, I literally did that.  It’s not just a deep metaphor for life).

No Longer a Cog in the Machine

Do me a solid and click a few google ads.