AbbVie (ABBV) announced it’s 2020 dividend increase 0f 11 cents per share, bringing the quarterly dividend to $1.18 per share from 2019’s $1.07.  This represents a 10.28% increase to the dividend from the previous 2019 increase and marks the 7th straight year of dividend increases from the company, since being spun off from ABT in 2013, and 8 years of uninterrupted dividend payments.

Lets take a look at the complete history of ABBV’s dividend:

As we can see from the chart, ABBV has a 7 year streak of increasing its dividend, but actually has two years with 2 increases. The average increase to the short dividend history comes in at and inflation crushing 17.46%. In the 7 years, the dividend has nearly tripled, growing at 195%.

A good dividend is nice to receive, but capital appreciation is also important. Let’s compare the performance of ABBV (since inception) to the S&P500. 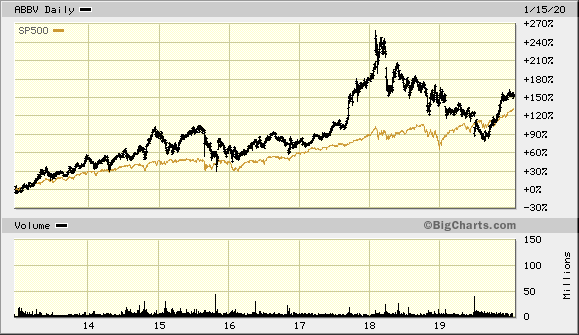 Looking from late 2012 (when ABBV was spun off) we see that ABBV has outperformed the S&P500. Most of that outperformance has occurred in 2017 with excitement over the pipeline from ABBV moving into late stages of FDA approval.  However, 2018 and 2019 were not so kind as some drugs failed to gain final FDA approval in late stages.

During that time frame (through Q4 2019), you would have received $5145.14 in dividends, or just under 52% of your initial purchase back in the form of dividends.  Adding in dividends, we get a total return of 206%.  Dividends added 51% extra return for you during the 7 year period.  The crazy thing, the dividend growth story isn’t done here.

I believe 2019 presented a great time to get into the stock.  I started reinvesting my dividends and adding more to my long positions in the stock as it was in the low 70s.  Even at the current price of about $90, I think there is still more upside to about the low $100 territory.  The fat dividend yield is also attractive in a market hard to find value.